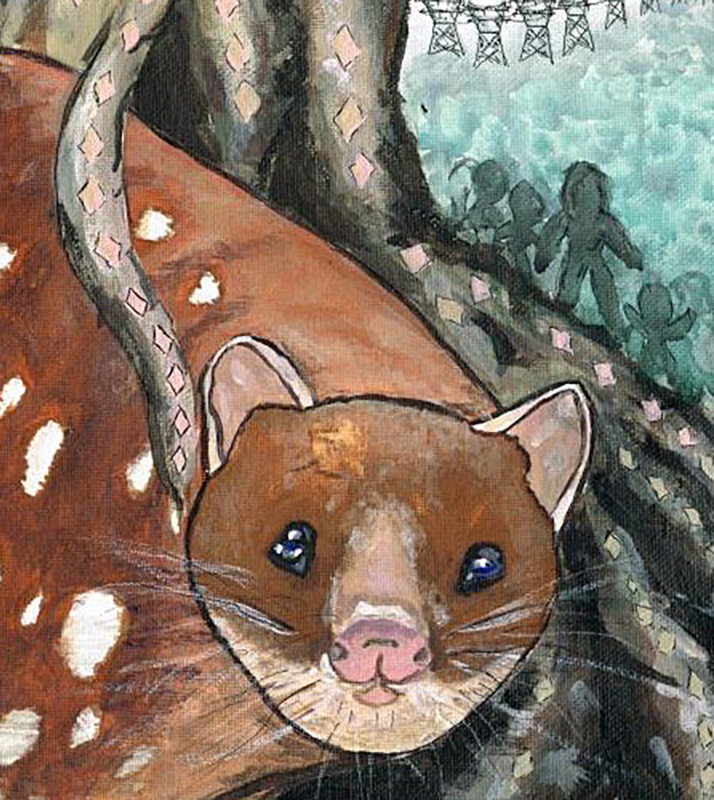 Join us at Eureka Centre on Wadawurrung land for this NAIDOC week performance of ‘Extinction: The Ballad of Pirt Koorrook’, a First Nations’ adaptation of a play by one of Australia’s most acclaimed playwrights, Hannie Rayson.

‘Extinction’ explores the themes of climate change and the need to protect biodiversity and fragile ecosystems from unsustainable modes of human behaviour. When Harry Jewell, managing director of a powerful energy company notorious for coal mining, hits and kills a tiger quoll, he decides to fund a research project to save this nearly extinct species. But there is a complication - Harry’s company has plans to build a high voltage electrical transmission tower network through the middle of the Otways.

This adaptation of ‘Extinction’ re-examines the themes of environmental ethics through the lens of First Nations’ people and culture. This re-worked script recognises the significant role that First Nations people play when it comes to offering a different understanding of how to care for and heal country. Set on the Traditional Lands of the Gadubanad, which includes the Otways in Victoria, four Indigenous and non-Indigenous characters navigate their own morality and choices in relation to the environment and the impacts they have on the world and relationships around them. At the core, the message is that we should always only take what we need, and be careful not to overstep our natural limits.

This adaptation is the brainchild of Georgia MacGuire, a First Nations visual artist and performer. The production is presented by Creswick Theatre Company. Playwright Hannie Rayson has been a part of the script development for this project, along with Gadubanad Elder and cultural consultant Uncle Ronald Arnold and dramaturg by First Nations playwright, Nazaree Dickerson.

On this adaption, Hannie Rayson said: “Georgia MacGuire's re-imagining of the play to create Dix and her brother Andy as Indigenous characters has added a whole new dimension and texture to the play. Also, the introduction of Pirt Koorrok, towering over the play, brings a profound sense of country and Indigenous spirit to the stage. I couldn't be more thrilled.”

‘Extinction: The Ballad of Pirt Koorrook’ is a powerful collaboration between Indigenous and non-Indigenous theatre makers. The play is directed by Tim Drylie (Kath and Kim and Sea Change) with First Nations co-director Corey Sailor Brunskill (recipient of an MTC First Nations Scholarship and member of the ILBIJERRI Theatre Company). Corey also features as a member of the cast alongside Shiralee Hood, an accomplished actor, director and radio presenter; Clara Edmunds, a professional actor from the UK; and Tim Harris, a local Ballarat performer. Palawa and Wiradjuri theatre maker Nicola Ingram rounds out this dynamic cast with her skilled interpretation of chorus and country elements for the show.

The Sunday 10 July performance of ‘Extinction: The Ballad of Pirt Koorrook’ will be followed by a Q&A with the cast and director and chaired by Ballarat Indigenous musician and educator, Deb Lowah Clark.  Tickets are available from Eventbrite.

In addition to this exclusive public performance, the play will be performed to visiting school groups by arrangement and supported by and education resource. Contact Eureka Education to enquire about weekday school bookings.